Haddonstone has been supplying high quality cast stone to Liberty Homes since 2004 on a wide range of luxury developments.  We were therefore the obvious choice for this prestigious project. 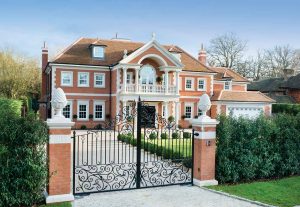 Haddonstone were approached by Liberty Homes to supply high quality architectural stonework for the impressive Park Avenue residence in Orpington, Kent, owned by Mr and Mrs K Rajakanthan.  The property is an exceptional, architect-designed private residence and Liberty Homes were keen to select the highest quality architectural materials that would pair both beautiful aesthetic and technical excellence. 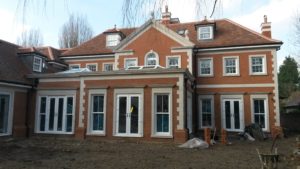 The highly-skilled team at Haddonstone utilised designs from our extensive standard architectural range of stonework for the development, which included the residence, an inbuilt double garage and garden landscaping elements.  Haddonstone semi-dry cast stone was chosen in Portland colour for each architectural component because the material has a texture similar to natural limestone and weathers beautifully over time.

Haddonstone standard window surround components were chosen to frame each of the 44 windows at the property.  These elements included classical window surrounds featuring sills, jambs, heads and cornice.

Horizontal Haddonstone band courses and quoins were introduced, adding an attractive separation amongst the redbrick and helping to complete the design.

Further Haddonstone elements were incorporated into the landscape, including copings.  Pier caps, plinth courses, name plaques and Ham House Pineapple finials which were chosen to complete the redbrick gate piers, adding a tasteful entrance to this highly desirable residence.

One important feature of the design was to create an arched entablature below the portico pediment. This followed the outline of a barrel vault roof framing the arched surround at first floor level. 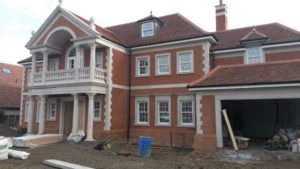 The stone was delivered to the site in January 2013 and the project completed in December 2014.